On Monday, I read Here Come the Girl Scouts! by Shana Corey and illustrated by Hadley Hooper because it was Nonfiction Monday and the theme for Picture Book Month was HEROES.  Learning about Juliette "Daisy" Gordon Low was inspiring! 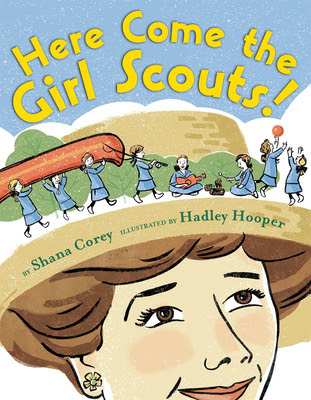 Here Come the Girl Scouts Shana Corey Interview from Expanded Books on Vimeo.
Here are comments from the kids' reviews:

"Juliette Low is an amazing leader."
"I liked how the illustrator made the Girl Scouts walk on Daisy's hat."
"How could Juliette Gordon Low travel the world, start the Girl Scouts, and have so much faith in all of them?  That took a lot of courage back then."
"Daisy was very important because she encouraged something that was not encouraged in girls."
"I like how Low's quotes were in interesting places."
"That quote (You will not have any luck unless you try hard) would make a good precept." (We had written precepts recently while reading Wonder.)
"I liked the illustrations because they had quotes in them.  They were hidden in weird places.  One was in the water, one was on a kite, and another one was on a badge."
"I liked the eyes of the animals in the woods."
"This book is good because it shows how girls should have equal rights.  It also shows how different it was 100 years ago."

On Tuesday, I didn't quite follow Picture Book Month's theme because I wanted to read Boy + Bot by Ame Dyckman and illustrated by Dan Yaccarino and frankly couldn't wait any longer!
﻿ 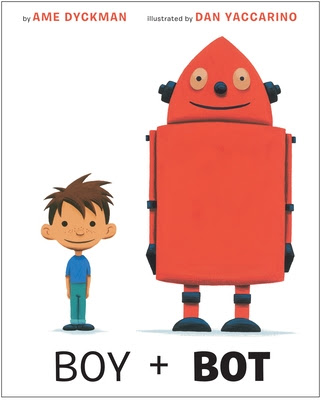 Mr. Schu loves Boy + Bot, and I love this video of him donating a copy of the book to a library.  I also love this video because there is a Bookmobile, and I have great memories of the Bookmobile when it came to my elementary school as a kid.  I even wrote a little character sketch about those memories recently during Kate Messner's Teachers Write this summer!
This is an interesting interview with Dan Yaccarino about another of his books, All the Way to America:
Here are some comments from my students' reviews about Boy + Bot:﻿
"I love how Bot and Boy were playing with each other at the end.  They were so happy!"
"I liked the illustrations because they had little side characters.  Like one time they had a little lightbulb by Inventor."
"I think it's funny because Boy feeds Robot applesauce, and Bot feed Boy oil."
"I liked that they cared for each other.  This is a perfect gift for friends."
"I thought the illustrations were really cool."
"I liked how when Bot turned on, his eyes lit up."
"The friendship was great, and it was cute how Boy and Bot cared for each other."
"I liked the theme because it showed that friendship is all about taking care of each other."
"I think the theme is that even friends with differences can be friends."
"It reminds me of Auggie and Wonder because he was different and that book showed that kids with differences can still be friends." (Wonder definitely made an impact on my students!  It comes up a lot with text to text connections!"
﻿
﻿
Posted by Holly Mueller at 8:07 PM