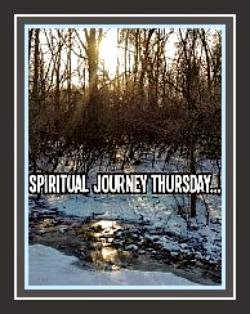 I look forward to Thursdays when I can publish thoughts on my spiritual journey and hear the thoughts of others on a weekly theme topic.  It has become a space for an encouraging and fortifying community to come together.  We welcome anyone who would like to join us!
Advent seemed too important to let go after only writing about it one week, so I chose it as the theme topic for the whole month.
This commercial is 32 years old!!  It's sentiment, however, is much older than that, and is very current today.  The Adult Education Committee in our church puts together an Advent Devotional, written by members of the congregation, every year, and when I read Trish Garrett's entry for December 5th, it struck a chord.  The verse for the day was taken from Luke 2:6-7..."While they were there, the time came for the baby to be born, and she gave birth to her firstborn, a son.  She wrapped him in cloths and placed him in a manger, because there was no guest room available for them."  Trish writes, "Ours is a time of many 'you deserve it' messages, promoting material abundance, ease, comfort, and convenience.  But that is not the example we see in Jesus.  After all, didn't the Son of God 'deserve' a better bed than a manger?  God could have arranged the best of surroundings and circumstances for Mary and Joseph and the Christ child; however, He, instead, gave us this humble example to follow."  Isn't that beautiful?!
Humility.  Jesus shows us he values humility time and time again.  The Christmas story is especially laced with humility; a baby was to be born of a teenage virgin and she was to marry a Jewish carpenter.  Even though the Jewish laws at the time would justify a divorce and even a stoning because the unborn child was not technically Joseph's, Joseph showed extreme kindness and humility and was assured that the baby was God's will.
You know the rest of the story.  Jesus was born in a crude stable, wrapped in cloths, and put in a manger.  An angel of the Lord announced the birth to lowly shepherds.  Another devotional writer from our church, Paula Shupe, wrote about the wise men and how gold, frankincense, and myrrh were actually pretty ordinary gifts "back in the day."  She goes on to say that the wise men were not "royal priests or Pharisees or Sadducees, but...pagans!"  Ordinary people were honored with the opportunity to come worship the Savior.  Isn't that amazing?!
Throughout Jesus's life on Earth, He continued to remind us that the meek, the sick, the poor, the last...will inherit Heaven.  Why, then, is it SO hard to practice humility?!  We judge, we criticize, we crave attention, recognition, praise, righteousness.  We want relaxation, luxury, and riches.  Don't we DESERVE a break today?!
The truth is, we can only enjoy real peace when we practice humility.  The fact that peacefulness is so hard to come by is because it's so hard to practice humility.  All our anxiety, worry, and discontent comes from focusing on ourselves instead of the Prince of Peace.  If we can manage to put Him and others first, then we can rest.  HE deserves that.
One of my daughter, Libby's, favorite Christmas songs is "Little Drummer Boy."  It's the perfect song about humility.  A little boy feels like he has no gifts to offer because he is a "poor boy, too," so he offers all he has.  A song.  And Jesus smiles.
Philippians 2:5-8 Have this mind among yourselves, which is yours in Christ Jesus, who, though he was in the form of God, did not count equality with God a thing to be grasped, but emptied himself, by taking the form of a servant, being born in the likeness of men. And being found in human form, he humbled himself by becoming obedient to the point of death, even death on a cross.
Posted by Holly Mueller at 1:00 AM