Slice of Life Story Challenge #2: What Is the Big Deal? 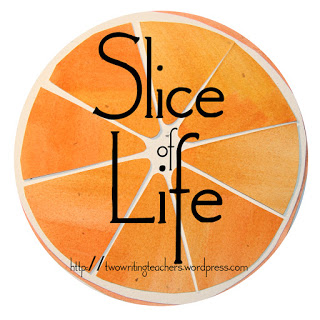 It's time for the 14th Annual Slice of Life Story Challenge!
I just finished Kimberly Brubaker Bradley's middle grade/young adult novel, FIGHTING WORDS on audio.  My favorite audiobook narrator, Bahni Turpin, narrated it.  It is a hard book.  It is a beautiful book.  It is an important book.  I know these Slices of Life are not book reviews, so I won't go into that now, but I want to talk about one of the take-aways.
The book is about sexual abuse.  Running through the book is a parallel story about a classmate of the main character and younger sister, Della's. He repeatedly pinches the backs of the girls in the class to check if they're wearing bras (they're 10), and when they're not, he calls them babies.  If they are, he snaps the straps.  This infuriates Della, and she speaks out.  However, many of the girls do not.  They endure it. They are silent. They're humiliated. If they tell a teacher, the teacher doesn't listen.  When the boy finally gets in trouble, his mother says, "Boys will be boys" and "It's no big deal".  The boy defends himself by saying, "It's funny" and "The other boys laugh."  When finally all the girls band together and speak out to the teacher at Della's prompting, he is stopped.  The teacher, who didn't really listen at first, realizes her error.  She changes and starts listening. The principal, by the way, is an eduhero in the things she says and does!
It makes me think of all the times educators, parents, adults, (I) might let things go.  Not listen.  Don't take action.  Give the advice to "Ignore him or her" and even say, "It's no big deal.  They're just trying to get attention."  Or worse..."He just likes you."
I remember being a kid. I remember being teased.  I remember boys (and girls) saying mean things.  I remember feeling helpless or humiliated by some of the things said and done. We have to pay attention to kids. We can't tolerate things that don't seem like a "big deal".  We have to listen.  We have to understand.
It IS a big deal.
Posted by Holly Mueller at 7:50 PM